“What you are looking at in front of you is the national team of Portugal.”

Paul Wagner, an instructor for over two decades for Napa Valley College’s Viticulture and Enology Department, began our journey into what Portugal has to offer in the glass.

A history lesson progressed at this Vancouver International Wine Festival seminar, with rich description of how wine came to be and how Portugal took on making this historical libation. 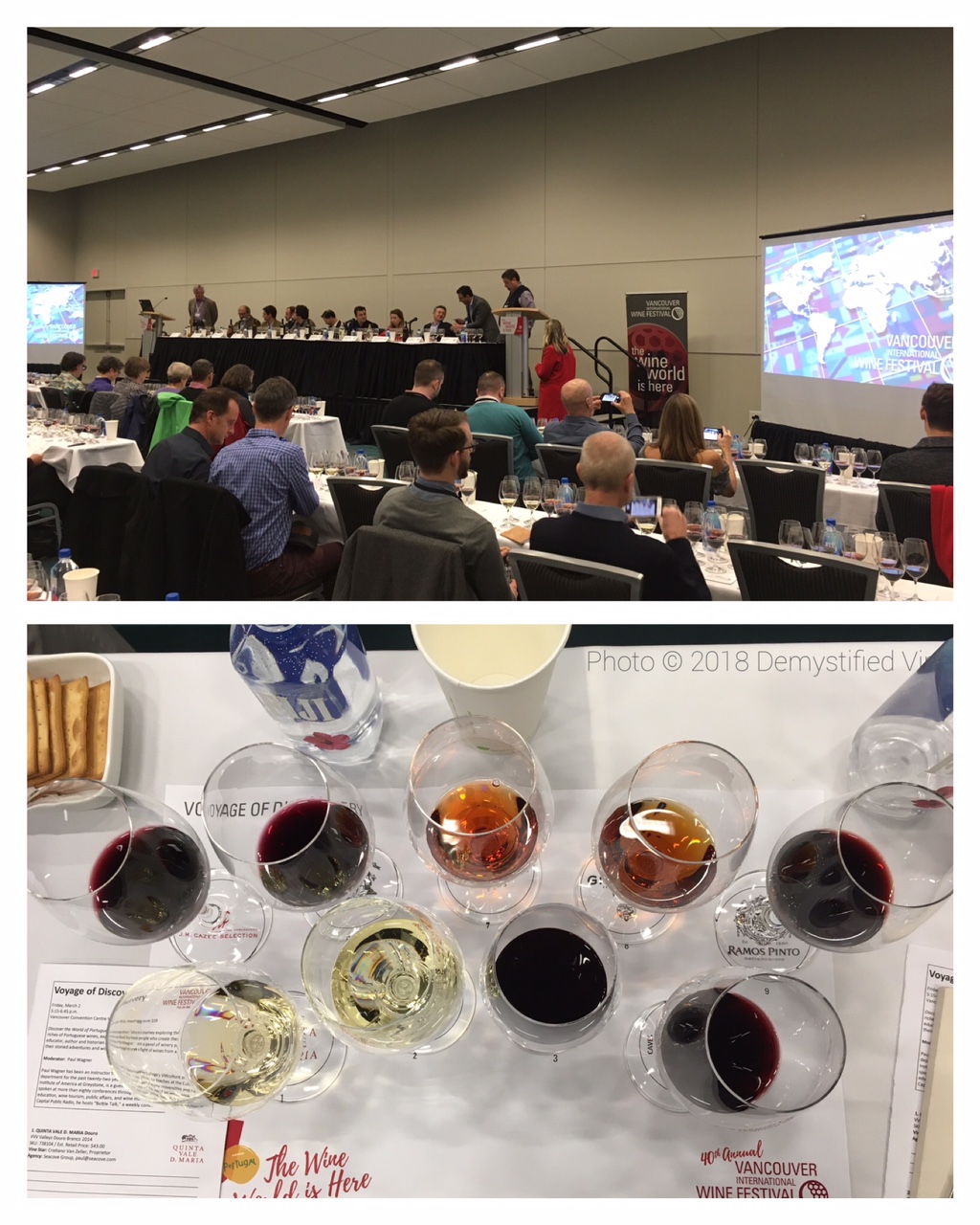 Historically speaking, “Port was the most important wine exported from Portugal,” Wagner informed us, and “Fifty years ago, Portugal was only making a couple wines that were [available] in our market. Wagner pressed on, “In the past 25 years, we’ve had people investing in wine quality in Portugal.”

Thank goodness the seasons are shifting towards accessibility, because Portugal’s wines are, at least in the aficionado’s territory, worth seeking out. That is honestly because there aren’t too many wine making countries offering the kind of value and quality for the price point that Portugal is.

Not holding on ceremony any longer, Wagner noted, “You’ve really got a treat in front of you.”

Cristiano Van Zeller, Proprietor for Quinta Vale D. Maria, opened the discussion with his VVV Valleys Douro Branco 2014. The winery has “been around for many centuries”, Zeller informed us, and I was engulfed by the buttery, biscuity, stone-fruit and beeswax nature of the Branco. The mineral driven finish was bold.

Diogo Reis, Proprietor & International Export Manager for Companhia Agricola Do Sanguinhal Lisbon, focused on the general sense of merriment that wine brings us. His words were not minced; he spoke of “the inspiration of drinking wine and enjoying life”, and that we must “have pleasure in drinking wine”. Many of us nodded in agreement as we tasted the Quinta de Cerejeiras Reserva Branco 2016.

And further down the panel of experts sat Luis Mira, Owner/President of Herdade das Servas, who presented the notion that, nowadays, terroir is a focus for Portugal’s winemakers. “The most important thing is to make a wine that tells terroir. […] To put the vision without perils [means] to drink and enjoy the wine.” Mira wanted guests of this seminar to extract that sense of place in the glass. The dark plum, black cherry, wine gum, and cola notes of the Sem Barrica Unoaked Red 2015 left me daydreaming about the summer heat of the Alentejo.

After tasting our way through Caves Messias Bairrada’s Classico Garrafeira 2013, which exuded the qualities of red & black fruits with a hint of root beer bark, we indulged in a lighter intensity wine from Famille JM Cazes out of the Douro Valley, whose Roquette & Cazes Douro DOC 2014 brought rose and raspberry, plum and toast to the … glass. I could not move on without mention of the Real Companhia Velha Douro’s Carvalhas Vinhas Velhas Tinto 2015 which knocked my socks off with its dusty mineral-driven bouquet and raspberry and wine gum notes.

As we began the finale of our voyage, we tasted through three lovely Ports, one of which was the Ramos Pinto Vintage Port 2000. Jorge Rosas educated the crowd on how perfect a pairing Port and cheese are together.

Anna Budarina, Sandeman Ambassador for Sogrape Vinhos Douro, spoke on the Sandeman Tawny 30 Year Old Port at an estimated $110.00 CAD per bottle. “It’s not a dusty wine,” Budarina said. “There’s a brightness in it […] and Tawny is an art of blending.” Budarina, the only woman on the entire panel of speakers during the seminar, held her stature during the discussion. “We don’t want it [Port] to be a dying drink,” Budarina flatly stated, and this 30 Year Old Tawny is a “great representation of [the] versatility of Ports.”

Symington Family Estates: Graham’s Douro also poured a Tawny, but this was their 40 Year Old Tawny. As if the bar wasn’t set high enough by Sandeman, the eyes on seminar-goers began to cross as they smelled and tasted through. Burnt sugar, caramel, white pepper, raisin, and other dried fruits burst forth. At an estimated $200 CAD per bottle, we had culminated our Voyage of Discovery, indeed.

Many thanks to Festival Chair Mark Hicken, Executive Director Harry Hertscheg, and Event Coordinator & MC Paul Wagner for making this seminar possible. ‘Voyage of Discovery’ was a fundraising event for the Bard on the Beach Shakespeare Festival made possible by the BC Liquor Distribution Branch, the Consulate General of Portugal, and the wineries themselves. You can find more information at VanWineFest.ca.