The grape varietal that wants to be popular, but just can’t seem to make it. The grape varietal that adds structure and a backbone in blends, but just can’t seem to “make it” among world wine drinkers. What’s with that anyway? That being said, I know a number of vineyards which grow Cabernet Franc and which make a single varietal wine out of it. The issue with Cabernet Franc tends to lean towards it being a favourable grape to add to blends in order to increase colour and fragrance, thus detracting its value as a single-varietal wine.

For those who don’t know a lot about Cabernet Franc, it enjoys warm, drained soils, similar to its “son” grape, Cabernet Sauvignon, also known as “the king of grapes”. Cab Franc tends to produce wines with less body and finesse than its son, although there are a few exceptions. The grapes tend to show stalky and herbaceous flavours similar to its relative, but can have a berry basis and be quite fragrant when all elements come together beautifully. Well suited to the Loire Valley, as the cool continental climate allows Cabernet Franc to flower and ripen early, wines from the Loire tend to be perfumed and juicy with light tannins and high acid. Tip: drink French Cabernet Franc’s slightly on the chilly side. 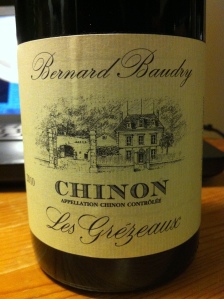 Bernard Baudry‘s Cabernet Franc is from the Chinon AC. The Chinon AC makes mostly reds from Cabernet Franc. The terroir of the Chinon appellation is quite varied, and ranges from sandy soils to gravel to limestone, which then varies how this varietal will reveal itself in wine.

Having had the opportunity to try “Les Grezeaux” Chinon by Bernard Baudry, the wine fit a few of the main descriptors listed above. It held a clean, medium intensity bouquet with dark fruit and toasted oak. The 13% abv wine was dry, with fine medium-grained tannins, and a slightly stronger-than-light but not-quite-medium body. The palate was more interesting than the bouquet. Black fruit-forward with a currant punch, and a nutmeg and cinnamon-infused medium length finish, I enjoyed “Les Grezeaux” for what these 50+ year old vines could show me about Cabernet Franc.

…[a] classic Cab Franc with raspberry-bramble bush aromas followed by currants, soft spice, tobacco and licorice. It’s simply delicious on the palate with raspberries and dark fruits, earth, cedar, smoke, herbs and gritty tannins that all lead to a long finish. (Quoted here.)

Interesting, considering terroir and climatic differences can truly engage a varietal’s character in different and not-so-good ways. In other words, Cabernet Franc is showing the wine world that it can stand up to the various differences of geographical influence and still hold its own. I asked Sandra Oldfield what makes this grape so special for her. Her response:

Cabernet Franc is perfectly suited to what vintners are trying to do in the South Okanagan. The vines thrive in our climate and pretty well make themselves in the cellar. I have made 17 vintages of Cabernet Franc from our estate vineyard now, and am convinced it was one of the best decisions we made many years ago when our winery began.

What I enjoyed most about her response, was that Cabernet Franc “makes itself” in the cellar. Who knows, maybe Cabernet Franc is trying to be as bold as its son, and may well show Cabernet Sauvignon who’s boss one day.

“Les Grezeaux” Chinon is available at select private BC wine stores, and if you’re thinking about trying Cabernet Franc as a single-varietal bevvy now, why not go for the more carbon-neutral option (as well as a local one) and try Tinhorn Creek’s Cabernet Franc. It only won Gold in 2012 at the BC Wine Awards. No big deal.