You might be surprised to find out that Greece is well known for more white wines than red ones. As with any country making wines, Greek reds come in a range of styles from soft and fruity to more vigorous and bold. One of the most interesting things about Greece’s red wines, is that they can be quite aromatic. I truly wish we saw more Greek wines in our market! There is potential for people to grow a deep love of these wines because the reds of Greece are not unlike commonly purchased varietal wines in North America, such as Cabernet Sauvignon.

The most popular red varietals from Greece are:

At the Wine Bloggers Conference in Penticton, BC, Canada in June 2013, I had the chance to try out two of the four: Agiorghitiko and Xinomavro. Time was of the essence at this tasting, as we only had one hour to attempt to taste 38 wines. I didn’t attempt to do that at all, as I enjoy taking time with each wine I try (quality learning over quantity for me, folks). As a result, I tried almost all of the Agiorghitiko wines and none of the Xinomavro. This is really bugging me now, of course. Next time around: game plan. I’ve already thought it out. Try at least three of each, and then return for others! I’m on it — not to fear! Live and learn. Onward!

Being one of the most popular red grapes in Greece, this variety is grown in a few different places throughout the country such as in Nemea (click for map). The name “Agiorghitiko” translates into “St. George’s”, interestingly enough! The wines made from this varietal span a range of fruit forward with softer tannins, to heavier bodied and ageable. Some rose wines are being made from this grape as well. If I were to describe this varietal using a single adjective, it would be: versatile.

Lucky me! I got to try a rose when I was at the conference. The Gaia 14-18h Rose was made in 2012. I was quite interested and impressed with this wine, as it had a strong similarity to Pinotage (one of my favourite wines). The nose flung itself at you with a world of savoury spices. Cumin and hints of curry were present alongside red cherries and other red fruits. The bouquet was most definitely more interesting than the palate, but what a bouquet! The acid was solid, and the flavour profile was much lighter in intensity than I thought it would be, after having done the bouquet evaluation. Overall, I was seriously impressed, and would love to sit down with this wine and examine it a bit more closely with a piece of herbed salmon and a side salad! 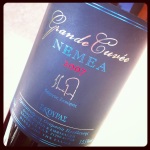 I also had the privilege of trying the 2007 Skouras Grand Cuvee from Nemea. Wow! Solid tannin structure here and good acid. After 6 years, this wine is still going strong; its ageability was loud and clear. Same grape, different style of wine, different drinking potential. Fantastic! Cherry, earth, raspberry jam, and peppery spice were all frolicking in this glass. 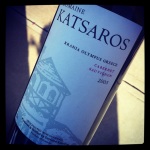 I know it wasn’t mentioned previously, but Greece is obviously growing noble varietals as well. I was able to try this 2005 Katsaros Estate Red that is made from Cabernet Sauvignon. It makes sense that they are growing this variety, because it needs a consistent hot climate to ripen fully and to produce a good wine. No trouble figuring out that the King of Grapes does fabulously in Greece, as this wine is already 8 years old, and has firm tannins and good acid to boot. What does that mean? Hello cellar! Red fruits, blackcurrant, leafiness, and tobacco were all present. I thought this was an amazing expression of the varietal. I’m going to have to research where I can get a bottle of this.

This varietal is a true native to Greece and when you translate its name, it means “acid-black”. The skins on this grape are deeply coloured. As there are over 10,000 varieties of vitis vinifera, this counts as one of them. Xinomavro wines tend to have characteristics of red fruits, earthiness, and herbaceousness. Spices can sometimes be found, and these wines have a strong potential for ageing. Since I didn’t actually taste any of these wines at the conference (boo, I know), if you’re interested, you can research some I could have tasted:
Katogi Averoff Naoussa 2007
Kir Yianni Ramnista 2009
Kir Yanni Akakies Rose 2012

In the final installment of The Wines of Greece, I’ll be examining the dessert wines of this ancient land. I promise you I tried a few of those. >wink< So I have a sweet tooth! I admit it!

One thought on “The Wines of Greece Part III – Red Wines”