The Pinot Noir wines found in British Columbia have a range of styles. Wineries are producing Pinot Noir that can be filled with a handful of ripe red berries to a funky-nosed style similar to what Casablanca Valley in Chile produces. While this is interesting to observe among the wines of BC, I find it difficult during a blind tasting to pin down this varietal! As such, I find that BC doesn’t have its own styling. When I taste a wine, I want to taste where it’s from. When I taste a German Riesling, I know it’s a German Riesling. For example, I typically taste the petrol and gasoline notes that I love so much. I love Pinot…a lot. I guess what I’m rambling on about is that I want to take pride in what BC’s Pinot Noir can offer, and the inconsistencies in bouquet and palate characteristics make it difficult for me to say, “Yes, folks of the world, this is BC Pinot Noir.”

I know. I know. Maybe I’m pulling at straws here. Pinot Noir is known as “the heartbreak grape.” Additionally, diversity is always a wonderful thing. There are other factors that need to be examined. For example, soil types always influence the grape and the characteristics that show themselves in the final product. Winemaking styles differ from winemaker to winemaker, and that also contributes to how a wine expresses itself.

Let me ask you this, then… Do you as a wine lover enjoy that familiarity, or do you thrive off of difference?  I’d really like to hear what you think! 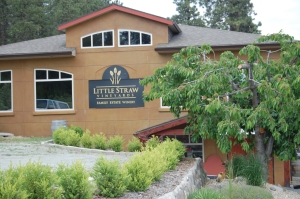 On that note, I recently opened a bottle of Little Straw Vineyards Pinot Noir from the 2008 vintage. I purchased it straight from the winery in May 2012, and I will never, and I mean never forget the moment I tasted it in the tasting room. I was really into Pinot Noir at the time, and most of the wines I was purchasing were of this varietal. So, of course, it doesn’t really have to be stated why I bought a bottle of this. But here’s the thing – this Pinot Noir stood out to me in a way that most BC Pinot Noir never had. It showed classic characteristics of Pinot Noir, but it also showed its terroir in a fantastically fabulous way.

Little Straw Vineyards is located on Mount Boucherie just outside of Kelowna. They are a family-run winery that opened in 1996, and are well-known for the production of their “Tapestry” blend 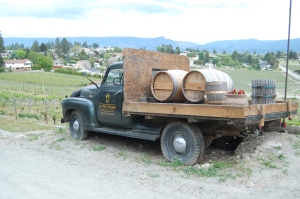 One of the wonderful things about this little vineyard and winery is that they participate in giving back to their community. In October 2012, they donated over $5,000 in tasting fees, collected between January and August, to the Westside Community Foodbank. Insert kudos here.

An amazing value at $21.90 per bottle, the 2008 Pinot Noir called “La Petite Paille” stopped me dead in my tracks. Again. 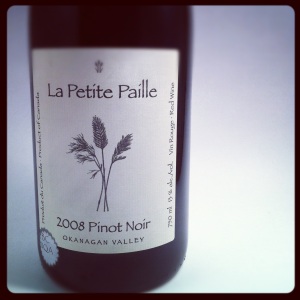 Clear, pale garnet, with very fast legs, this medium intensity wine was still developing in the bottle. Boasting with delightful cherries and a side of raspberries, this earthy, dusty Pinot was still impressing me in February 2013. The beautiful bouquet continued with savoury notes, a hint of cracked pepper, and a floral sweetness of vanilla-rose.

Soft, rounded tannins set the stage for an interesting palatable experience. Medium bodied and 13% alcohol, La Petite Paille was tart on the back of the tongue with a kick of minerality from those old volcanic soils that surround the vineyard. Strawberries, raspberries, tart cherries, and spicy earth all pushed the long dusty finish. Well balanced, this wine is drinking now, but I’m sure in another year’s time it will still be kicking. This wine also won Bronze at the 2012 NW Wine Summit and the 2012 Canadian Wine Awards. Need I say more?

Bottled in March 2011, and only 172 cases produced, this is a real gem that you do not want to miss out on, folks. Go grab a bottle at your local wine shop, and taste what BC Pinot Noir has to offer. You can thank me later.