My recent trip to the Okanagan wonderfully began at Little Straw Vineyards (@LittleStrawWine) in West Kelowna. There is a soft spot in my heart for this small vineyard and winery ever since I tasted their 2008 La Petite Paille Pinot Noir. I first stopped into this winery in May 2012, when I was on a weekend wine tasting trip. I was greeted by Jessie with a bright smile the first time I visited, and it seems nothing has changed – except Jessie’s hair. We had a chuckle that I remembered her hair used to be really long, as she now has a short hairdo. 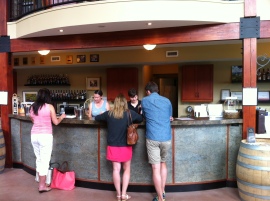 Sue Ursuliak (@LittleStrawSue), Jessie’s mom, graciously met with my colleague and I to chat and taste some wines. She was one of the sweetest people I have ever met – truly, a genuine and light-hearted soul. We chatted about how the winery came to be, and about how the vineyards are coming along. Kelowna had a lot of rain during June, and Sue quickly pointed out that the vines are doing very well. 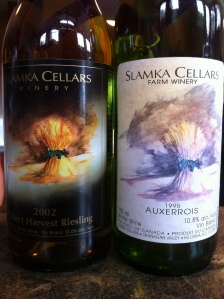 This is a family winery run by three brothers named Tim, Rick, and Pete Slamka. Originally, the Slamka family first planted grapes in 1969 with hopes to sell their crop to larger commercial wineries. However, after Pete, the winemaker, finished a world tour in 1993, he wanted to make wine at home. During his trip, Pete went to various wineries and made Pinot Noir. Those who have had their Pinot Noir know that they do Pinot Noir very well [said in an exaggerated voice]. No, I’m not bias. By 1996, their first lot of wines made from the 1994 vintage were ready to be released. Since then, the family has purchased a number of acres of land around the vineyard on Mt. Boucherie, and are making some intriguing wines from fantastic varietals like Auxerrois and Lemburger.

Originally called “Slamka Cellars” after the family name, they decided to switch their name to the english translation, as “Slamka” translates into “Little Straw”. Producing about 4,000 cases a year, there are no plans to increase production. For more information on Little Straw, watch the ~3 minute video available on YouTube here.

If you have the chance to visit Little Straw Vineyards, you must stop in and try their 2011 Old Vines Auxerrois. With a sweetness code of (0), you can expect clean notes of pear, floral, and citrus on the medium intensity nose. With good structural acid, medium body, and alcohol at 12%, you won’t be surprised at how graceful the yellow apple, green fruits, white flowers, and minerality shine in this wine – which also has a good length. It won silver at the 2013 Pacific Rim Wine Competition. 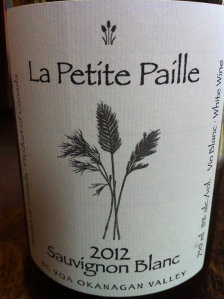 Gaining a reputation for their Sauvignon Blanc, Little Straw makes a dry and off-dry version of this versatile grape, and I adored the 2012 La Petite Paille version. This wine smelled of grassy meadows and savoury herbs. Gooseberry, green fruits, and a little hint of lemon were all present. I found out towards the end of the tasting that their Sauvignon Blanc grapes are planted near clover and alfalfa fields. On the palate, parsley and green fruits came together. With a medium body and medium alcohol, this is a great summer sipper! Only 218 cases produced.

One of the interesting varietals that Little Straw Vineyards grows is Marechal Foch. Their 2009 vintage is a very good expression of this hybrid varietal, and exudes cherry, plums, spices (thyme, clove, black pepper), raspberry, and minerality due to their location on Mt. Boucherie – an extinct volcano. Dry, with soft tannin, and medium body, you’ll want to give this wine a go at least once. After all, there are only really a handful or two of wineries in BC that are still growing and making wine out of it. 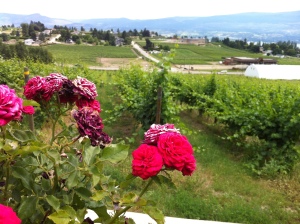 Looking down into the vineyard at Little Straw

Thank you to Jessie and Sue for your kind hospitality while I was visiting. Your family is making some glorious wines. I will hopefully be back soon to say hello and purchase more bottles!