On January 31st, 2014, at the Vancouver Public Library, wine lovers and experts alike had the opportunity to come together to discuss one of the wine industry’s colossal questions: Does wine begin in the vineyard or in the winery?

The debate was moderated by talented DJ Kearney.

Many folks were discussing their points of view prior to the panel sharing their viewpoints, and it was intriguing to see how intently folks were engaged in what this group of writers, advisors, viticulturalists, and winemakers were bringing to the table.

I decided it would be interesting to take this colossal question outside of the debate. My objective was to get the opinions of people who are in the wine industry, to tell me what side they would take if they were to examine this question themselves. I contacted Russell Ball from Adventures in BC Wine and the editor for the British Columbia Wine Appreciation Society Newsletter, Luke Whittall of Wine Country BC and a Black Hills Winery “Wine Evangelist”, tythewineguy who is an avid wine lover in addition to working for Liberty Wine Merchants, and Conrad – a popular wine writer from the group called “The Wine Wankers” out of Australia.

To be honest, going into this little side project, I was thinking that having four opinions would result in a similar situation as at the debate: about a 50/50 split. I, personally, went into this debate with a sturdy opinion that wine begins in the vineyard. I won’t reveal where I’m at now until the very end. Hey! Don’t deny it; this question isn’t easy to answer!

During the debate, David Scholefield made an interesting point with regards to both wine in general and BC wine. In summary, his thought process was that there are two kinds of wine: “commodity wine” (being wine that people buy to simply consume on a daily basis) and “wine of interest” (wine that is more valuable, rare, not for everyday drinking). Commodity wine, as Scholefield implied, involves the ability to produce vast quantities to 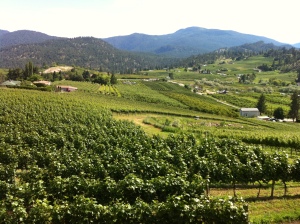 meet consumer demand. He went on to say that British Columbia could never make commodity wine because we just do not have the space to plant that many vines. As a result, wine begins in the vineyard because it is about the romance and the story about where the wine originated. Wine is unique and distinct because of the vineyard and the land from which it “came from”. Bring that all together and BC’s wine industry is, according to Scholefield, making “wine of interest” from the land.

“Yes!” I thought during the debate. “One point for the vineyard team!” Luke Whittall took a similar stance post-ponder and agreed that the vineyard is where wine originates:

Great wine is made in the vineyard. The most consistently high quality wines come from parcels of land that have unique soils. However, the vast majority of wines sold in liquor stores are not ‘great wines.’ That doesn’t mean that they aren’t good wines or can’t be someone’s favourite. It just means that the vineyard’s influence has been blended, processed, or otherwise manipulated out so that they wine is less expensive, more widely appealing, ready to drink sooner, and/or consistent year to year.

Both Scholefield and Whittall have made some interesting arguments for why wine starts in the vineyard. The terroir is a critical factor in how the final product – the wine we drink – is perceived and enjoyed. Whittall’s argument is that plots of land that bear interesting soil or terroir tend to produce higher quality (and more intriguing) wines. Take into consideration Karen MacNeil’s advice on “Matching the Right Grapes to the Right Ground” in her book The Wine Bible:

Some of the best wines in the world come from France. It would be argued that the best wines come from this Old World country. The concept of how terroir effects wine was birthed in France and flourished as French winemakers began to read their land. MacNeil additionally points out that, “…the French have been so convinced that nature and geography make the wine that there has never been a French word for winemaker” (p. 112). Not convinced yet that wine begins in the vineyard? Sid Cross passionately purveyed that soil, topography, and climate are key factors in making wine. Terroir-driven areas like lakes, hills, and various elevations all exist here in BC, but BC doesn’t recognize that yet. I quoted Cross as saying, “Terroir speaks everywhere but in BC … but it will in 10 years”. Why not right now? I suspect it has something to do with the fact that BC is still “playing around” or “fine tuning” the varietals that sing the loudest in our beautiful viticultural area.

Conrad, from The Wine Wankers, posed an interesting question when he said,

Hmmmm, does wine begin in the vineyard or in the winery?  This is almost like the old clichéd chicken and the egg, almost, but not really.  Although you can eat grapes separately to wine, like you can eat an egg separately to a chicken (or is that the other way around?), wine doesn’t exist in the form we all love until right at the end of the process.  So does this mean that the end process, a function of the winery, is the most important process and where the actual wine itself begins?

Well of course not.  Yes, technically that is wine begins to turn into the magic elixir we adore, and it is crucial to get the wine making spot-on to create the best drop, but the characteristics that make up the wine actually begin in the vineyard and without good grapes you cannot have good wine.  It’s the location of the vineyard, its soils and environment, and the farming decisions made that produce the best quality grapes.  So a wine always begins in the vineyard and then transitions to the winery where the magic

It’s warm here in Aus so I think I might have a chicken and egg salad tonight washed down with an average Aussie Chardonnay that had great wine making applied to it.

I’m in total agreement here. You just can’t have good wine without good grapes. I adore the idea that the winery is where the “magic is completed”.  The significance of Conrad’s point is irrefutable. If the grapes are grown well in the vineyard, then the winemaker simply needs to complete the crafting process. What’s the score so far? I’ve lost count. A glass of Aussie Chard and a chicken and egg salad sounds lovely right about now…

Moving on then! So, what about those who genuinely believe that wine begins in the winery? When I asked tythewineguy, his response was not only fun, but practical:

“Grapes begin in the vineyard.
Yeasts exist in the vineyard, winery and (today) in the laboratory.
It is the decision or non-decision of the winemaker as to which, when, where and how these two interact.
There is nothing “natural” about the processes and decisions of creating fine wine, although it tastes sometimes, quite de-vine.

His point, from my interpretation, is that you get grapes from the vineyard and wine from the winery. Thus, wine is the result of both artistry and competence in the winery by the winemaker. The winemaker takes what comes from the land and uses his/her skill sets in order to creatively craft what is consumed. Wine is not simply the direct product of Mother Nature’s fruitfulness; the winemaker must assess and consciously decide how to go about turning grapes into fine wine. 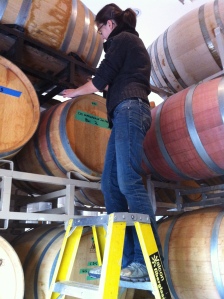 Ann Sperling, being one of Canada’s top winemakers, had her own opinion. Of course she leaned on the side of wine being made in the winery. Her opinion, in summary, was that you will never be able to “define” a wine when there is no style, type, etc., attributed to it. These wine “genres”, as she called them, illuminate the artistry of wine making. There are genres within genres in wine making. Essentially, it is the winemaker who takes a natural, agricultural product and examines (or envisions) a final, good wine. It is the application of these genres where wine is made…in the winery.

Kathy Malone argued that wine needs intervention. Without intervention, wine will not only go bad, but it will never have the potential that it could. The “parameters and protocol” that winemakers use change all aspects of wine and how it is expressed. For example, a wine expresses itself on the mid-palate differently as a result of using yeasts or oak. Malone believes that wine begins in the winery, as it “allows terroir to speak”.

Russell Ball’s quote illuminates where I stood by the end of the debate on that cold Vancouver night:

One got the sense over time that even the debaters themselves were agreeing with one another, that in fact both facets contribute vital importance to wine. As Howard Soon declared, “it’s a bum question – the implication that it’s one or the other.” That was certainly my own take, especially when my wife noted the number of times the vineyard team mentioned “the potential” of the grapes, inadvertently revealing the necessity for a winemaker to complete the process. It didn’t really take much for the audience to come to the realization that both terroir and talent are required for great wine, made all the more obvious by how many people held up both voting cards when Moderator Kearney sought our opinion at the end! Maybe not as dramatic a debate as last year’s question about BC’s need for a signature grape, but it was certainly exciting to see the industry stalwarts and visionaries assembled on the panel contributing thoughtful (and entertaining) analysis to the issue.

Where does that leave things? I cannot fathom that wine is merely just made in the vineyard or in the winery. Without grapes, you can’t make wine. Without good grapes, you don’t have the potential to make good wine. What happens if you take good grapes and make “bad” wine? Well, then you’ve made bad wine, but you’ve still made wine using grapes that came from a vineyard. I’m convinced that you cannot separate the two; wine and wine making are like two peas in a pod, an old married couple who still hold hands, two lovers sharing a kiss, peanut butter and jelly….chicken and egg salad sandwiches with an Aussie Chard…

What do you believe? Welcome to one of the wine industry’s colossal questions.

18 thoughts on “Ruminations: One of the Wine Industry’s Colossal Questions”